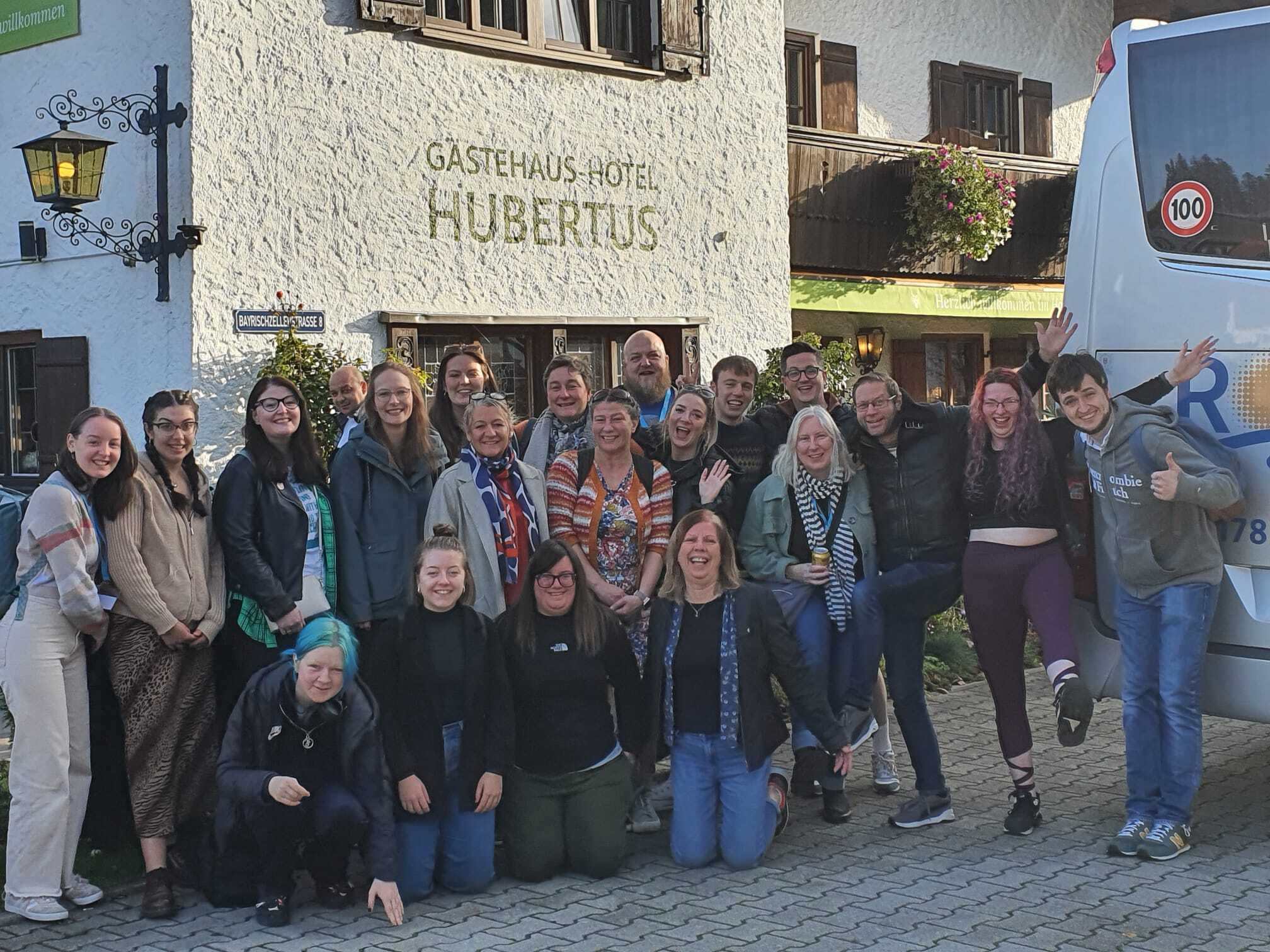 A short walk from our hotel was the Markus Wasmeier Freilichtmuseum. A museum of reconstructed rural houses from around 1300 – 1600 Bavaria. We went on the last day of the trip. It was the most beautiful of autumn mornings. The kind of morning where to forget your sunglasses is more than regrettable. It leaves you squinting painfully into the light or putting your hands in front of your eyes, only to draw attention to yourself from the tour guide: “Yes? Do you have a question?” asks the traditionally dressed guide. A woman I would guess in her late 60s, full of passion for her calling, sharing her knowledge of Bavarian homes and the kind of world they were built in. She did it with a side portion of unapologetic politics and wit. “No. It’s just.” I gesture to the sun. She nods. “Come on then!”

We step into a dark home first built about 500 years ago. “In here is a fire that should never go out. There is no chimney. The smoke just goes up and around. There were lots of superstitions about this fire. If the coal embers weren’t kept going all winter it was a bad omen, a bad wife or both. And beneath the fire there were bad spirits that could kill you, which is why they slept sat up in bed and babies often died. Maybe, just maybe” our guide suggested subversively, “maybe the powers-that-be wanted the people to stay ignorant, because if the people are focused on bad women and spirits rather than lack of resources and carbon monoxide, then they will not be troubling the power of those powers-being, will they?”

Of course, I am paraphrasing…a lot. But. Can you feel a metaphor approaching?

I was lucky enough to be part of the study visit: “Digital Youth Work and the Gender Gap”, organised by the Bavarian Youth Council and YouthLink Scotland last month and it was inspirational.

Firstly, I was inspired to understand that two thirds of young people are engaged in youth work in Bavaria. [Bavaria has a population of 13 million and Scotland about 5 and a half million.] I don’t think Scotland is able to account for how many young people engage in youth work.  According to YouthLink in Scotland, there are 80,000 youth work practitioners, working to support and engage 385,000 young people every week in learning, social, and personal development. So that’s maybe about a third of young people. But what about the work that companies like mine do? Civic Digits work with young people creatively, supporting them in their digital citizenship through making games, tech and stories. We submit the data to Creative Scotland about who we work with, but does that get counted anywhere as ‘youth work’? What about all the after-school clubs, the music groups, the coding clubs, the sports clubs, the culture-based groups?

Working with young people is in my experience an absolute pleasure and education. I feel driven to do it because youth work shaped me so much. If I hadn’t had the Greenwich Young People’s Theatre when I was being bullied at school, when I was trying desperately to stay in the closet, when I needed a different perspective on the world, I don’t know what would have happened, but I doubt that I would be here. And I like being here. In Edinburgh with my wife and son.

We all have a profound interest in the health and well-being of our young people. We need them and they need us. After the pandemic we can see all around us the effects of two years of lockdown. I know too many young people who are experiencing extreme mental health distress, whom I feel sure wouldn’t be feeling so bad if they had been able to do the usual growing up, out of the home that was really their right. Young people have been living their lives online, as much as off, for nearly a decade now and because of the pandemic that has increased beyond any of our understandings. Digital technology is a fantastic way for young people to grow, learn and connect but it’s not the same as being in the same room and they shouldn’t be alone in their explorations of all the good, bad and downright horrific that the digital world holds for them. Now is the time, more than ever to invest in young people. Especially their lives online.

The second reason I was so inspired was the amount of investment and the way it is done. For example, the German Government invested 1 million euros in Bavarian young people during the pandemic because they recognised that they would need it and the young people of Bavaria were supported by the Bavaria Youth Council to decide what to spend it on! Amazing. Real money and real trust invested in young people.

The third reason I was inspired was the connectedness that the Bavarian Youth Council bring to the youth work they support. They finance amazingly well-resourced hubs where young people can go to work with state-of-the-art technology, where they can access training and run their own projects as well as take part in projects offered by youth workers. There are teams of researchers that back up the understanding of the needs of young people for their youth workers. There is even this outreached hand to Scotland, to see what we are doing. “Young people come to learn what it’s like to be independent, to be accepted and to be valued. And in doing so, they shape their own futures.”

What could be achieved if everyone with an interest in supporting young people to engage with digital worked together? How can we make this happen?